Orchard Heights Park’s 29-acres are a popular destination for Salem-area residents who enjoy the trees, running trails, dog friendly spaces and other park amenities. The City of Salem was ready to invest in some significant improvements, including replacing the existing four tennis courts that had reached the end of their useful life, adding two increasingly popular pickleball courts, making the area wheelchair accessible, and reconstructing the basketball court. 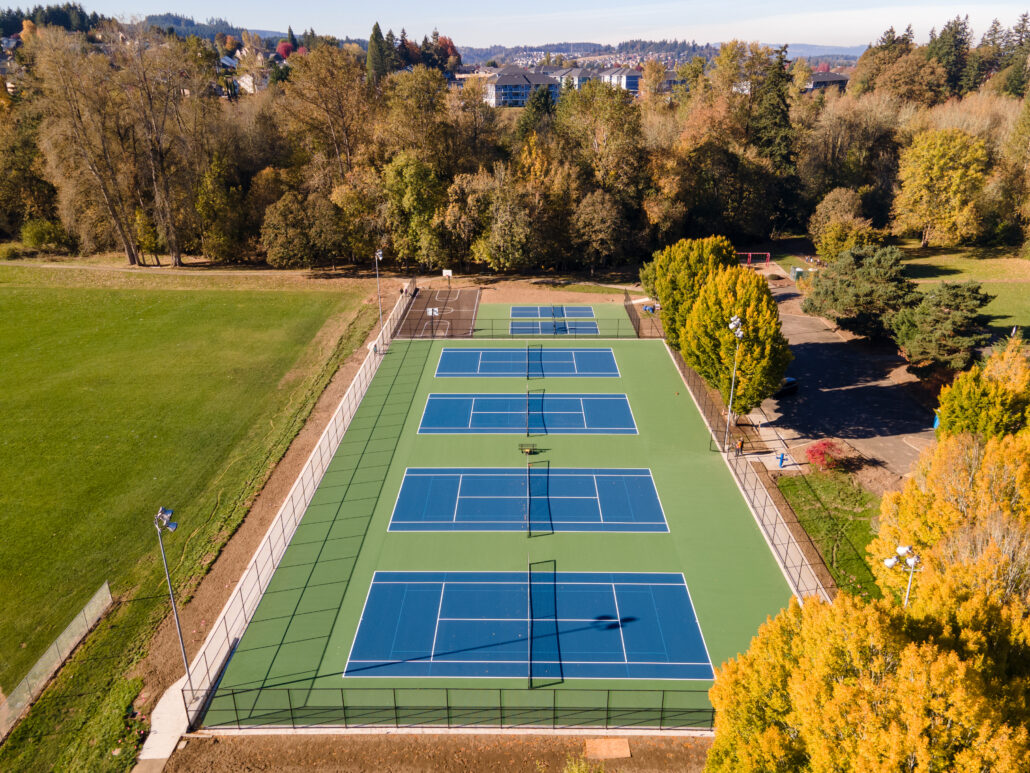 The City of Salem hired North Santiam Paving for the project and stipulated that they wanted USTA-certified courts built to tournament specifications, while meeting all current ADA requirements for wheelchair accessibility. NSP was prepared to ‘ace’ the job; these were not the first tournament-ready courts they had built. NSP installed the outdoor courts at Portland Tennis Center in 2009 in addition to many other courts in the area. 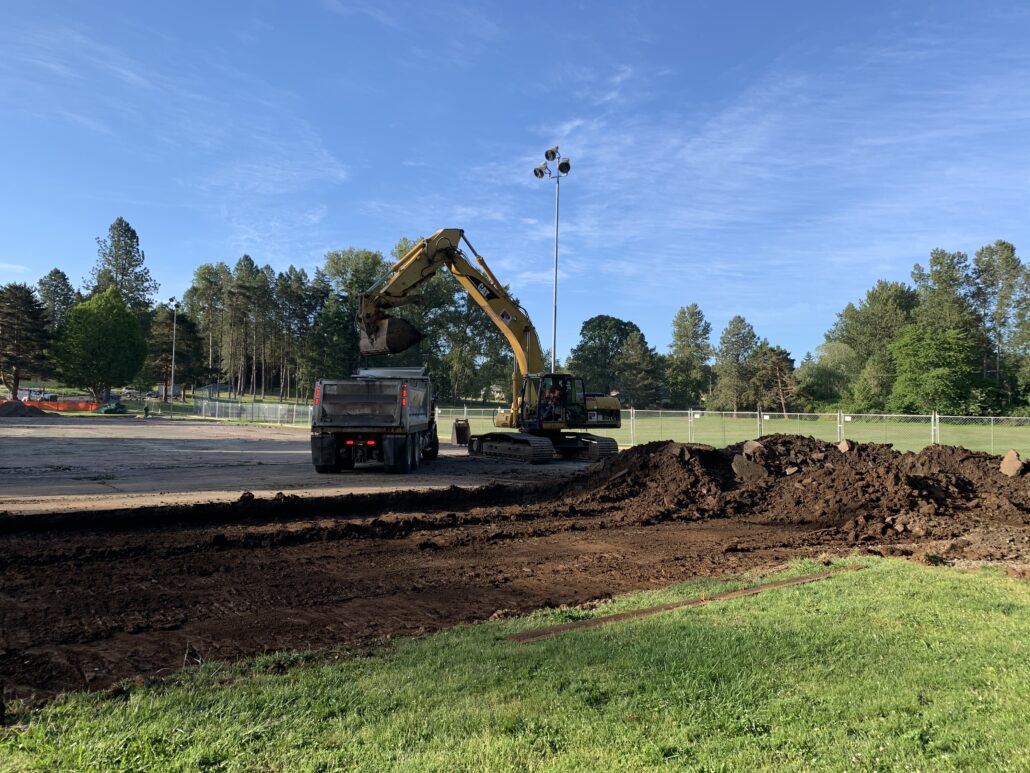 That being said, the project did not come without its challenges. Shortly after removing the original courts, NSP and the City of Salem discovered the water table was only two feet below ground level — the original courts had been built on top of a low-lying and wet area at the park. Additionally, tennis courts tend to hold some underlying moisture by nature, but too much moisture will increase the natural deterioration of the court surface, destabilize the courts and shorten their lifespan. 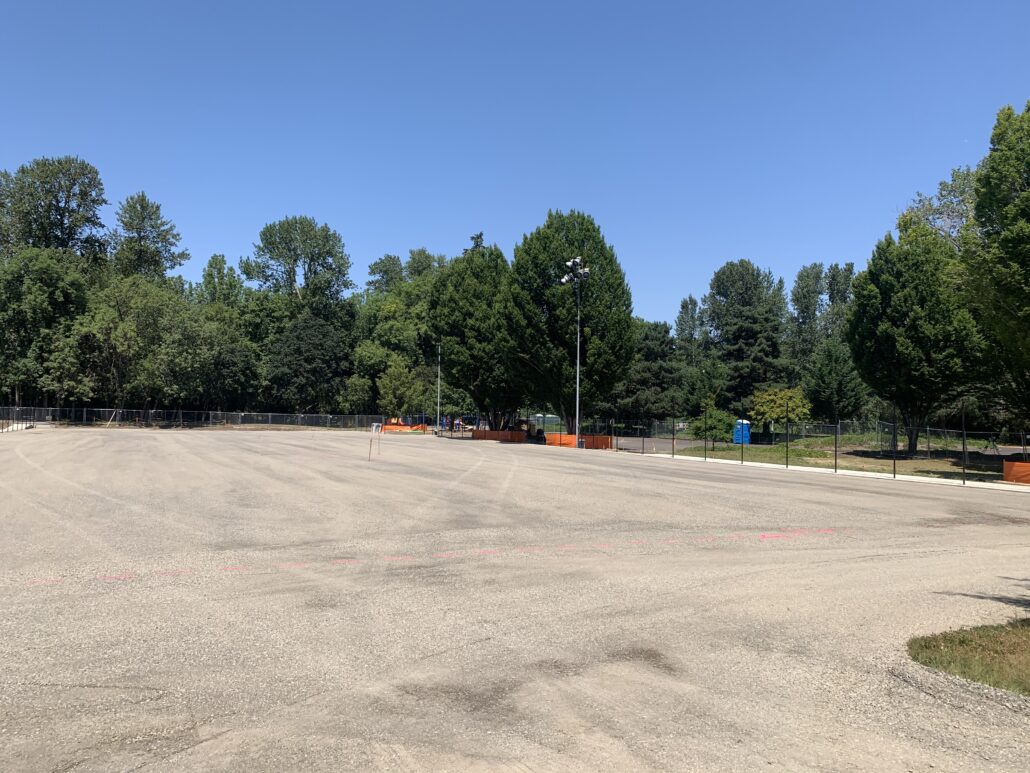 Finished rock grade ready for paving at Orchard Heights Courts. The courts are located in a low-lying area with a high water table. To combat this NSP and the City of Salem worked together to raise the entire court six inches from original design elevations.

The high-water table and soft grade under the courts increased the moisture content of the subgrade, potentially destabilizing the courts and/or causing premature deterioration. The courts could not be moved to a different location on the park grounds, so the City of Salem and NSP worked together to find a solution and determined that adding six more inches of rock (for a total of 12 inches) could help mitigate the problem. 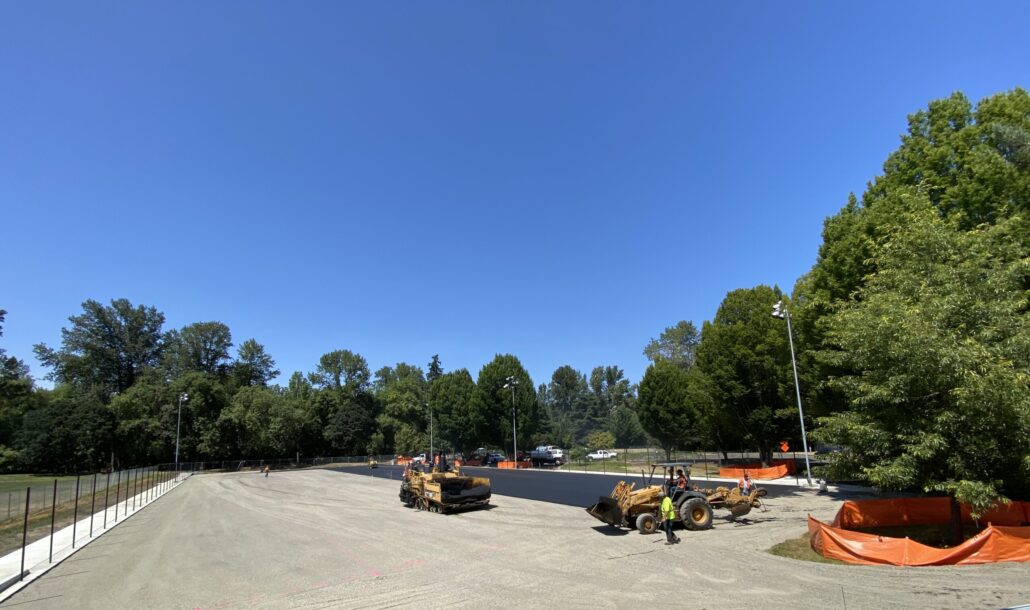 NSP paving the first and only 2″ lift of asphalt for the new court surfaces. The minimal thickness left no margin for error with the tight tolerances

In addition to installing the various new courts, the City of Salem intentionally designed various aspects of the project in and around the courts to meet ADA guidelines for wheelchair accessibility. NSP was charged with constructing all the sidewalks around the courts and building an ADA ramp in the parking lot. These paths were made wide enough to accommodate the wheel splay of athletic wheelchairs. In addition, the gates into the courts were made wider to meet the needs of wheelchairs. These enhancements were incorporated into the plan so the courts would be wheelchair tennis friendly.

With the completion of this project, the community now has wheelchair-accessible, tournament-ready tennis courts with an additional two new pickleball courts and a newly resurfaced basketball court.